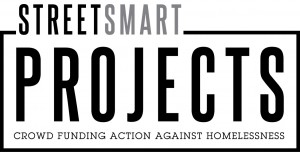 ate 2014, after 18 months works, we launched our own crowdfunding platform, StreetSmart Projects.  The concept was simple – to empower smaller grassroots homeless services to engage and connect with the StreetSmart supporter community to crowdfund important projects in the community.  The pilot platform ran for 12 months raising over $35,000 for 10 projects.  Organisations such as Dandelion Support Network, The Footpath Library, Safe Futures and Emerge Womens and Childrens Network all successfully used the platform and each of the 10 projects reached its funding goal.  In a number of cases we raised considerably more than the $ target through donations direct to the organisation, in kind support and additional support.

We were very pleased with the results and so were the organisations we worked with.  Crowdfunding these urgent needs sparked a great community response and StreetSmart supporters stepped up and donated direct to projects they could see were making a difference.  The platform was powerful at telling the story of these smaller organisations, their projects and clients.  As one of the projects said…

“Working with StreetSmart was absolutely amazing!  We were given a great platform to gain support and funding for our Art Therapy program for children who experience domestic violence.  This was our first attempt and we were guided and mentored by the StreetSmart team with so much dedication that we achieved our goal in a few days. Through this platform, Emerge was able to raise our profile and engage with a wider community.

Thank you so much for your support, we really could not have ventured into crowd funding without your expertise. It felt like StreetSmart was part of our team at Emerge, spending time and helping us write key messages to articulate our cause better and gain community support.  It was an amazing experience and it will make such a difference in the lives of the young children we support.  For small organisations like ours, this kind of support from StreetSmart is invaluable.”   Shini Kelly, Communications and Grants Officer Emerge Women and Children’s Support Officer.

However what became clear was that the smaller organisations setting up the crowdfunding projects didn’t have the resources to support the crowdfunding so that role fell on StreetSmart’s small team, something that StreetSmart could not sustain with our current staffing levels.  After 12 months we also had a number of technical issues that needed to be addressed and by December 2015 we had been badly let down by our IT provider and made the tough decision to suspend the project and take the ‘Projects’ platform offline.

Thank you… a huge thanks to everyone of our supporters who helped fund a project.  Each donation had an impact and these projects just wouldn’t have got off the ground without you.  Also a big thanks to Mitty Williams from The Kimberley Foundation for funding this pilot and instrumental at initiating the Projects platform.

During this pilot we learned a heap of stuff about crowdfunding and how to make it work for grassroots projects. We learned that our StreetSmart community relished the opportunity to donate directly to some of the smaller unknown projects that StreetSmart has been supporting for 13 years, and we also learned that to do this we need to provide full support for the organisations.  With our current team we can’t do this.  However we have plans to build our team in the coming months and with our transition to WordPress for our main website last year, this will enable us to consider bringing the crowdfunding function back onto our main website.

So stay tuned, the idea’s not dead yet! 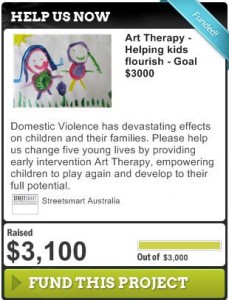 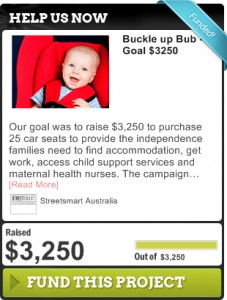 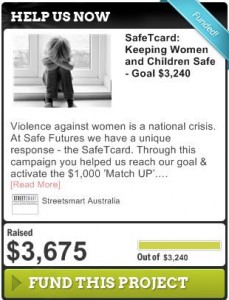